Karl Friedrich Rapp is the name of the founder of BMW - one of the biggest world wide car manufacturing companies. BMW or Bayerische Motoren Werke (Bavarian Motor Works) was founded in 1916 as a successor to the Rapp Motor. 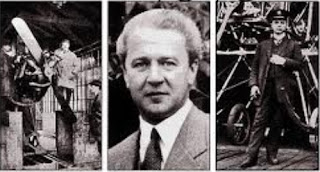 Many people think that the logo of BMW comes from a spinning white propeller seen in the background of the blue sky. This may be so but in fact it is known that it also comes from the white and blue flag of Bavaria - the largest state of Germany. The capital city of the state is Munich and this is the place where even today we can find the BMW Headquarters.

In 1916 with the foundation of the company a contract was secured for building V12 engines. These engines were about to be used in the creation of the automobiles from Austro-Daimler. These 12 cylinders V engines were at first used in aircrafts which is the original plan of the BMW Company. Taking in account the time when the company was founded it was very likely for them to continue like that.

However in 1919 after the World War I and the Treaty of Versailles the production of aircraft in Germany was prohibited and that quickly changed the politics of BMW. They began making brakes for the Rail transport. Soon after that BMW was able to design a motorcycle engine which was used for the creation of a motorcycle called with the model name Victoria. However Victoria was not built by BMW but by another company in Nuremberg.

In 1924 BMW made a model of a motorcycle which was the first one they built - the R32. This was a turning point in the BMW history because it was a major achievement and for decades they used its technology - 500 cc engines cooled down by the air. Soon after that BMW added one new innovation - the driveshaft. It came to replace the chain for driving the rear wheel and became a mark of BMW for quite some time.

In the German city Eisenach in 1927 began the production of Dixi - under license but only a year after that the Dixi Company was bought by BMW and they began mass production together with the model Austin Seven.

When the World War I began BMW took its place in it because of the German army's motorized division. They used BMW R75 together with BMW R12. Because of the high need of engines BMW note that period as highly profitable. BMW was the main supplier and even today words like Luftwaffe and Wehrmacht brings many memories. Some of the best planes in that historical time used the BMW aero-engines and till the 1945 more than 30 000 planes with these engines were manufactured.

BMW even made researches which enabled the company to make different jet engines for weapons. With the use of some men power consisting mainly by prisoners of the war BMW made many rocket-based weapons that were used in the war.

Soon after the creation of the rocket-based weapons parts of the company were bombed. Soviets razed to the ground most of the company located in eastern Germany and the base factory in Munich was almost completely destroyed.

After the war BMW was not able to quickly recover because of the need to rebuild the factory in Munich. After that when the restrictions from the Allies applied BMW was banned for three long years in which the company was forbidden from producing motorcycles until 1948 and cars until 1952.

In 1951 the Bavarian company was able to regain all trademarks and it looked like it was finally able to recover and start again from what was left. In 1959 Herbert Quandt became the "wheel" which turned the BMW around because he denied a deal with Daimler-Benz and soon after that he increased his share in the BMW Company up to 50%.

The name of Kurt Golda is stated as the man who incited Quandt to do this step and in the same year BMW began production of the BMW 700 which was based on the BMW 600. This small car used 2-cylinder, air-cooled engines and some years later it was renamed to "LS". Coupe and some cabriolet series were also manufactured.

In 1963 BMW offered dividends to the shareholders of the company and in 1966 the factory in Munich reached its maximum capacity and BMW bought Hans Glas GmbH. This deal enabled BMW to use factories in Landshut and Dingolfing.

With some new style provided by Bertone in 1972 BMW began production of 5 new series and in the years to follow the company made a big progress in the market. For 6 years under the leadership of Bernd Pischetsrieder BMW was able to expand its deal in the market by buying from British Aerospace the Rover Group. Rover Group's history starts in 1986 and till the moment when BMW owned it this company was able to achieve many things like for example the Rover 400 in 1990.

However the Rover was sold to Phoenix Venture Holdings and Ford Motor Company because of some years of losses for BMW. Jokingly the press called the Rover "The English Patient" after the release of the namesake film. This however was not very hard on BMW and they were spared from taking the blame. It looks like that even the British press was not very enthusiastic about the Rover.

BMW began production outside of Germany in 1994. New factories were made in South Carolina and even today the manufacturing of BMW X5 and BMW Z4 is made there. There are factories in some other places too like Oxford, Goodwood and others. After some time of assembly BMW began production in South Africa. Today BMW exports more than 50 000 3 Series vehicles yearly to Japan, USA, Africa, Australia and the Middle East.

In order to serve the market in Eastern Europe and Middle East BMW are planning to begin construction of a new plant located in Cyprus or Greece. A plant in Chennai, India already opened production in 2007.
Email ThisBlogThis!Share to TwitterShare to FacebookShare to Pinterest
Home
Subscribe to: Posts (Atom)